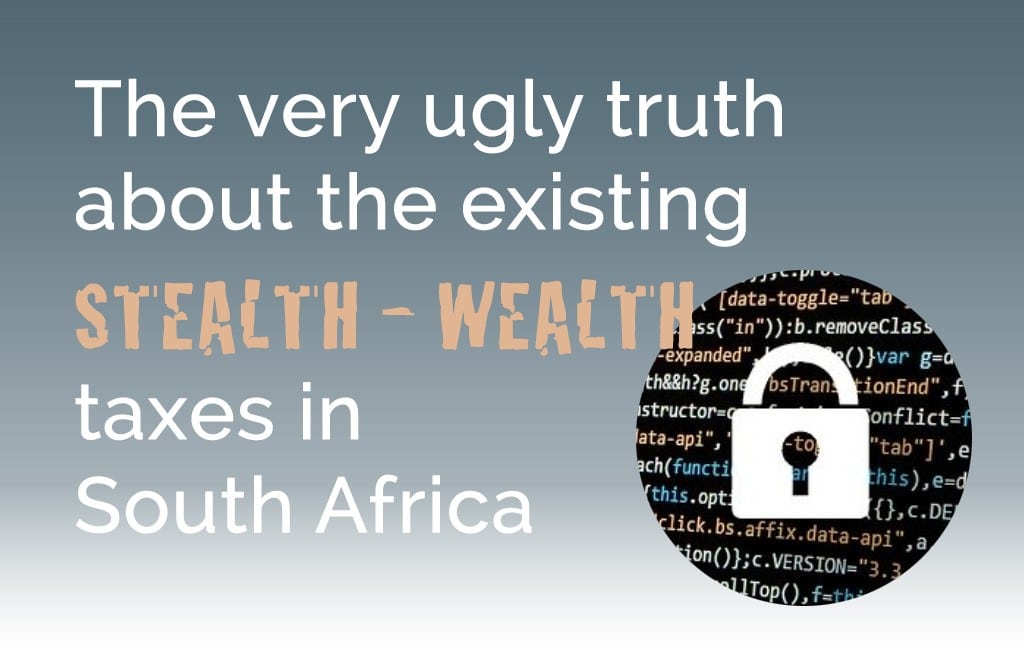 An argument has been put forward by the Davis Tax Committee that there are no “wealth” taxes in South Africa; we are prepared to concede this argument conditional on the opposition conceding that certain “Balance Sheet” taxes do exist. To provide context for what follows; we actually argued FOR a formalized tax on wealth instead on the “secret” wealth tax proxies that we discuss below.

In attempting to explain our position, we will be referring to certain tax-technical terms in parentheses where they carry their defined or commonly held meaning. No attempt will be made to analyze or argue the nuances of these terms.

The taxation of “Taxable Income” is an annual event. The event seeks to tax the “Taxable Income” received or accrued to a taxpayer within a tax year. Balance Sheet Taxes (our terminology, and not defined) attempt to tax events, irrespective of how the quantum driving the event occurred. Examples of Balance Sheet Taxes are “Estate Duty”, “Dividend Withholding Taxes” and “Capital Gains Taxes”. Our argument goes as follows;

1. Irrespective of whether all of the “Dutiable Estate” was accumulated prior to the introduction of “Estate Duty”(1955), “Estate Duty” would still be levied upon the person’s demise in 2020.
2. If all of the accumulated profit that is being distributed as a dividend in 2020 was accumulated prior to 2013, the 2020 rates (20%) would apply and not the 2013 rates (15%).
3. If all of the “Capital Gain” which was realized in 2020 occurred prior to 2012, the 2020 inclusion rate (40%) would apply, and not the 2012 inclusion rate (25%).
Balance Sheet Taxes effectively expose historic economic growth to the rates prevalent at the date of the current happening of the event. What makes these taxes so egregious is that in many cases the economic growth so taxed is purely inflationary and is not real growth.

The influence of inflation on the effective rate of Capital Gains Tax payable on real growth is enormous and under-unappreciated (or is that “under-despised”?).

“Capital Gains Tax” is the term applied to the marginal rate of Income Tax applied to a fraction of the computed “gain” realized on the sale of a non-inventory asset. A common example of such a sale would be the “gain” made on the realization of property.

For purpose of this investigation we examined a real case scenario of property located in Green Point which had fallen into a deceased estate in February 2018.

Due to ill health the deceased was not working during this 2018 tax year, but to pay for his medical expenses he withdrew the maximum that he could from his living annuity during the year, thereby artificially boosting the his marginal rate of tax to 45%.

The deceased had no other material dutiable assets other than the house; the majority of “his” assets being in a living annuity.

To be able to arrive at the effective rate of the “Capital Gains Taxes” on real gains, we naturally need to determine the real growth in the property from 2004 to 2018. In order to do this, we calculated the inflation adjusted purchase price (2004-2018) of the property to date of demise. We did this using the SARB average inflation rate in S.A. from 2004 to 2018. This resulted in an inflation adjusted value of R3 777 218.

Once this figure was determined, we deducted this from the 2018 sales value to determine the real gain. Put another way, we were thus able to determine what percentage of the capital growth of the property was due to pure inflation and what portion was due to a real capital gain in market value.

Our calculations brought about the following conclusion:
59% of the nominal Capital Gain was due to the average inflation rate and not due to a real capital appreciation. Disbelieving readers are free to reach out to us to check our calculations.

The influence of inflation and bracket creep on “Estate Duty” is also not to be ignored.

“Estate Duty” is a tax on the net asset value of the deceased, including certain deemed assets and after allowing for some specific exemptions and deductions

The background is exactly the same as above, and so the relevant paragraphs are repeated here.
The owner passed away in February of 2018. The property was purchased in 2004 for R1 800 000 (Excluding Transfer Duty of R118 400, more about this later). At the date of his demise the property was valued at R5 250 000.

The deceased had no other dutiable assets other than the house; the majority of “his” assets being in a living annuity.
The property was originally purchased with the intent to be used as his “Primary Residence”. However, after taking ownership of the property, it was never used as his “Primary Residence”. This was mainly due to geographic work commitments and, later, health reasons.

Then there are the “Balance Sheet Taxes” which are well known and recognized.

Rates and taxes are levied as a percentage of the market value of the property. This percentage is agnostic as to the real increase *(or not) in the market value of the property. Think of it as the equivalent of an asset manager’s annual fee. The rates and taxes multiplier increased from 0,4% in 2004 to 0,55% in 2018. This represents an increase of 37,5%.

Transfer duty is a tax levied in terms of the Transfer Duty Act on any immovable property which is acquired by way of a transaction or otherwise.

The background is exactly the same as above, and so the relevant paragraphs are repeated here.
The owner passed away in February of 2018. The property was purchased in 2004 for R1 800 000 (Excluding Transfer Duty of R118 400). The inflation adjusted market value in 2018 would be approximately . At the date of his demise the property was valued at R5 250 000.

We then took the market value in 2004 and increased the value with the average inflation rate to determine the inflation adjusted cost price of the value of the property in 2018. We then applied the 2018 Transfer Duty table to this inflation adjusted value, and found that the transfer duty amount payable increased with 110%, from R118 400 in 2004 to R248 494 in 2018, on a property which had experienced no real gain.

To back up our findings we took the 2004 Transfer Duty amount and only increased this amount with inflation, which resulted in a figure of R248 457, which also represents an increase of 110% as mentioned earlier.

Our calculations once again prove that in the case of transfer duty the increase is significantly higher than one would expect. This also means that the cost of purchasing property becomes higher every year and the increase in this tax does not take inflation into account.

Although this tax has no relevance to our example it still qualifies as a “Balance Sheet Tax”. It should also be noted that this tax increased from 15% to 20% in 2013. This effectively is a 33% increase.

The conclusion of all our findings brings about a clear message.

Balance Sheet Taxes do exist and significantly influence the balance sheet, and can be materially more impactful than what tax payers are expecting. The impact of these stealth-wealth taxes are materially driven by the influence of inflation and by the significant increase in the tax multiplier as well as the failure of the abatements to keep up with inflation.