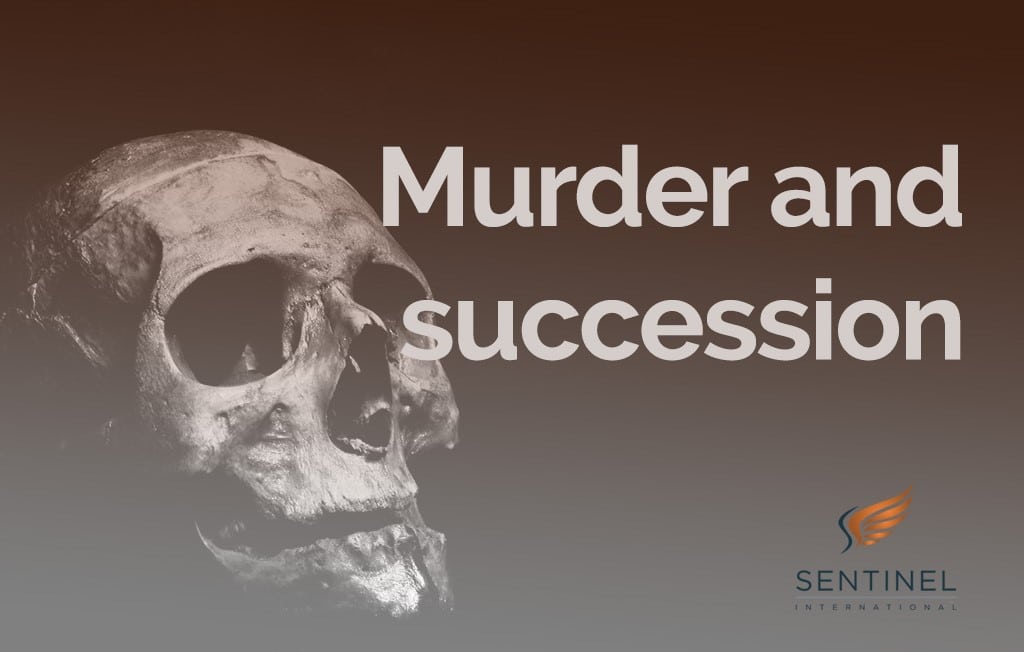 In South African law, a person who causes the death of another is said to be disqualified from inheriting from the person they kill. But it’s not always as simple as this. This article will look at a few fascinating inheritance court cases where murder has played a role. Prepare to be surprised. [1]

What makes a murder?

The first case, which deals with the very definition of murder, was decided in 1999 in the matter of Leeb v Leeb. Mrs. Leeb was convicted of the murder of Mr. Leeb and duly sentenced to 25 years imprisonment for his murder. The Leebs were married in community of property and at the death of Mr. Leeb, the main assets consisted of a farm brought into the estate by Mr. Leeb and some insurance policies. An order was sought for Mrs. Leeb to forfeit any patrimonial benefits she would have received and also to forfeit any benefit she would have obtained by virtue of the marriage in community of property.

The forfeiture of benefits by a person who causes the death of another goes back to Roman times where any heir or legatee would be disqualified from receiving a benefit from the testator if he (or she) had merely conducted himself toward the testator in a manner which made him unworthy (indignus). The murder of a person would certainly fall into this category. This principle of unworthiness was also taken up in Dutch law through the maxim ‘de bloedige hand erft niet’ (‘the bloodied hand must not benefit’) and from there into our law. Now the principle that a person cannot benefit from his own crime is firmly established in our law and is based on public policy. In English law a murderer is barred from inheriting from the person they have murdered.

After considering the history of being disqualified and various other cases, the judge came to the following conclusion: That where one of the two spouses to a marriage in community of property murders the other, the court has the power to order that the spouse who committed the murder, forfeits by reason of the murder, the benefits of the marriage in community of property.

The judge referred the application for the hearing of oral evidence to determine whether the first respondent did or did not murder the deceased and also to determine what effective contributions they respectively made to the marriage.

Strange though it may seem, a murder conviction is not sufficient evidence to support a court application for the convicted murderer to forfeit their benefits derived from a marriage in community of property.

The logic behind this is explained by van der Walt and Sonnekus in a 1981 article: The decisions in Gafin and Meier [two other cases involving murder] again confirm that the ratio [reason for the decision] behind the bloody hand adagio is the reprehensible and morally blameworthy conduct of the beneficiary concerned. It is here that the emphasis should lie and not on the criminal conviction.[2]

This probably explains the decision not to rely on Mrs. Leeb’s court conviction only, but rather to call for further oral evidence.

But what if the convicted spouse is mentally ill…Do they still not qualify to inherit?

This question came up in the 1980s case of Gafin v Kafin (mentioned in the paragraph above). Where a beneficiary murders a testator or conspires with others to bring about the death of the testator, it is accepted law that they cannot inherit from the victim, regardless of whether or not a Will exists. In the Gafin case, the deceased and her husband executed a joint will in terms of which the husband would become the sole beneficiary if she died. The husband then shot and killed the wife and two of their children, wounding a third child. The husband was duly charged with murder, but found not guilty as he was mentally ill at the time of committing the crime.

The executor of the wife’s estate then applied for a court order declaring the husband to be unworthy to inherit from the estate of his late wife. The judge, in considering the application, went as far back as quoting Johannes Voet (1647 to 1713), a renowned Dutch jurist, who stated: Nevertheless if he who killed the testator had a cause for killing him which was just, and which was approved by laws, he ought by no means be deemed to be unworthy of what has been left to him. Where there is no blame there ought to be no penalty and ademption of the quest is a kind of penalty.

The husband was, after considering all the facts, found to be able to inherit from his deceased wife.

In another application in 1980 (Ex Parte Meier) a mentally disturbed son shot and killed his father. His mother, and siblings brought an application to court to declare him worthy to inherit from his father. In consideration of the application, the judge quoted the following passage from the 1934 case of R v Holliday: What may for convenience be called the sanity of a person concerned, is essential to criminal responsibility; without it there can be no crime.

And then summarized his finding by saying: “Die onvermoee van n indignus om te kan erf uit die nalating van sy slagoffer vind juis oorsprong in die skuld van die indignus aan die dood van die erflater. Waar daar geen skuld is nie, is daar geen straf nie…Regtens kan ek geen verskil sien tussen die erfopvolger wat skuldloos is omdat sy optrede geregverdig is en die een wat skuldloos was omdat sy optrede waansinnig was nie. Beide is myns insiens nie indignus nie.(The inability of an unworthy person being able to inherit out of the inheritance of his victim finds its origin in the guilt of the unworthy person of the death of the person leaving the inheritance. Where there is no guilt, there is no penalty…Legally I can see no difference between the successor who is blameless because his action is justified and the one who is blameless because his action was insane. Both are in my view not blameworthy.)

The judge found that the mentally ill son could inherit from his father’s estate.

The long and the short

Under South African law, if you either justifiably cause the death of a testator, or are mentally ill at the time of causing their death, you are still able to inherit from the deceased. Even if you are found guilty of murder, the mere criminal conviction might be insufficient to disqualify you as heir. Instead it would have to be proven in the civil court that you murdered the deceased…Or at least it would need to be found that your conduct was morally reprehensible and blameworthy in the death of the deceased. On the other hand, even if you are not found guilty of the murder of the deceased, you could find yourself declared indignus and unable to inherit if your conduct toward the deceased is found to be morally reprehensible and blameworthy.

The following extract from a 2016 thesis states: Although the rules regarding common law unworthiness are not clearly set out, the Court cases in this study show that the courts are willing to dilute the general principles of unworthiness and is [sic] willing to take into account principles of reasonableness, fairness and the public policy considerations when deciding on the unworthiness of a person.[3]

[1] All information in this article was sourced from DSP Cronje and Anneliese Roos, Casebook on the Law of Succession (Unisa Press, 2018)

[2] Some further light on this is shed by the footnote of the authors (Cronje & Roos) where they state on page 190 of their book, quoting authors van der Walt and Sonnekus (1981 TSAR 44)

[3] Alida Malherbe, ‘The Dilution by the Courts of the General Unworthiness Principle’, unpublished LLM thesis, (University of Pretoria, 2016)