A self-confessed nerd who admits to dreaming about tax, Jean-dré’s also got a wicked sense of humour and a work ethic that’s second to none.

When a senior consultant left Sentinel in 2020 Jean-dré Tombisa, who was only 25 at the time, was asked to take on quite a bit of extra responsibility. The way she responded has been “simply astounding”, says Chanel Schoeman, who heads up our Consulting department. “Jean-dré is extremely hungry for knowledge,” she explains. “And she never wants to be caught off guard.” Instead of asking a question, she “does the research and then comes to check with me if she’s found the right answer.”

She also has the gift of lightening the mood when the going gets tough at work, adds Chanel whose favourite Jean-dré quote is: “This is like cockroaches…as soon as you get rid of one, the next two pop up!”

But we are getting ahead of ourselves. For most of her Pretoria childhood, Jean-dré was the youngest of four kids. “Then, when I was 14, my parents surprised me with a little brother,” she remembers. “I found it quite disturbing at the time. We’d just had ‘the talk’ at school, and it just felt like too much information!” Luckily, she got over these concerns and, these days, she and her brother love nothing more than playing PlayStation in the lounge and going to the movies together.

What’s in a name?

“I think I might be the only girl in the world called Jean-dré,” she says, explaining that it’s a mashup of her grandparents’ names. “Most of the others seem to be Afrikaans rugby players!” And she should know: Jean-dré speaks Afrikaans at home and she went to Hoërskool Centurion. (Her entrepreneur dad and bookkeeper mom insisted she also cultivates a “nice” English accent.)

A self-confessed “nerd” who always got good marks, Jean-dré grew up loving Star Wars and Star Trek – and she still hasn’t shaken the bug. Somewhat predictably she hated playing sport at school…But, strangely, she loves watching it on the box. To this day, the Tombisa family gets together regularly to watch “tennis, soccer, rugby, cricket…anything but golf!”

After matriculating in 2012, Jean-dré started studying Accounting Sciences at Wits the following year – the first time she’d ever been taught in English. She has fantastic memories of first and second year, living away from home for the first time and managing to find a good balance between socialising and studying. Things started to get a bit trickier in third year: “I just couldn’t pass Financial Accounting,” she explains with a laugh. She tried rewriting a couple of times but eventually moved to UNISA and changed her subjects slightly. “I felt bad staying at Wits and wasting my parents’ money as a full-time student!”

Wits’s loss was Sentinel’s gain. In May 2017, a family member told her we might be looking for an assistant estates executive and the rest, as they say, is history. When Jean-dré was offered the job, she assumed she would be in advisory as she’d made it very clear in her interview that she’d always loved tax. “I actually dream about tax,” she confesses, before clarifying: “I don’t like paying it…But I do find it really interesting!”

Instead, she found herself in the Estates department, getting a crash course on the administration of deceased estates and also being taught “the true meaning of patience” every time she tried to get a client document out of a financial institution! After one-and-a-half fruitful years in Pretoria which taught Jean-dré loads and also got her a few steps closer to graduating, she transferred to Sentinel’s Joburg office for “a change of scenery.” After a few months shadowing a key member of our executive there, Jean-dré was finally able to make her tax dreams come true, with a move to our Consulting department.

That was in 2020 – the same year Jean-dré graduated from UNISA. “I have to pinch myself when I think about how much she has grown,” says Chanel. “And most of that while working from home during a pandemic. It really is unbelievable.” (On that note, Jean-dré says she actually prefers working from home, as she doesn’t get distracted by office chit chat and can work crazy hours – she often starts at 4 am – without disturbing anyone.)

Her new job involves “a lot of tax residency complexities, local and international tax advice, and navigating complicated client cases with SARS and SARB.” True to form, Jean-dré is taking it all in her stride. “The job is centred around the thing I love the most, so I thoroughly enjoy it,” she says. She relishes having to find creative solutions to problems and “has had to learn how to feel confident” doing client consultations and giving presentations. Her new job is “a continuous challenge, in the best possible way…I’m just going with the flow.”

Which is not to say she doesn’t have a pretty clear idea of where she wants the flow to take her! With Sentinel’s support, she registered as a Tax Practitioner last year, and she is currently waiting to hear from UNISA whether she has got into their Post-graduate Diploma in Tax program. After that, she has her sights set on a Master’s in International Taxation.

“I have absolutely no doubt she will get there,” says Chanel. “And then she’ll be looking for the next challenge. Mark my words.” 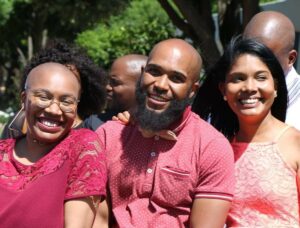 Jean-dré with her brother Gino, and sister Stacey at her other sister’s (Samantha’s) wedding.

Sentinel’s Gqeberha representative hasn’t always had it easy. But she’d rather go bungee jumping than…